Dead Man is a superbly made mystical western in which a young man travels out west in the United States. Set in about 1850, the film follows the young William Blake (Johnny Depp), on the run from a bounty hunter. An Indian named Nobody takes this William Blake to be the reincarnation of the legendary English poet William Blake. When William is wounded, Nobody tries to patch up and help this mysterious young man. 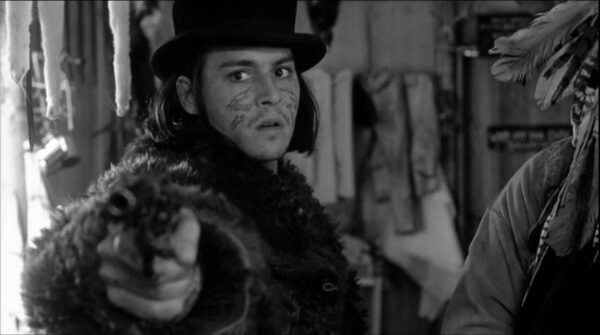 Dead Man is not just a western; fundamentally it is about the acceptance of the earthly life and its impermanence. This feature made 1995 is the absolute pinnacle of Jarmusch’ oeuvre. The film is brilliant in every respect: the plot, direction, characters, imagery, the gritty guitar soundtrack by Neil Young, and the actors, who are clearly in their element. Johnny Depp excels in the lead role, and Gary Farmer too, as the Indian Nobody, makes a strong impression. Born and raised on a reservation in Canada, he is the plot’s philosophical pivot.

Jarmusch’s regular cameraman Robby Müller delivers excellent work. He had earlier made his name as a cinematographer working on Wim Wenders’ best films. Müller about Dead Man: “We filmed in British Columbia, such a fascinatingly beautiful region that had we shot in colour, the film would have been Discovery Channel material. Colour can often provide too much unnecessary information. It is just like poetry: the words you don’t need are the ones you omit when you work in black & white”

The Way of Jim Jarmusch

New York film director Jim Jarmusch (1953) is one of the most successful independent American filmmakers of all time. Many of his wry films have become classics, in which the main characters are strangers in their own countries. Prompted by his latest film ‘Paterson’ (2016), the EYE film museum has reissued his classics in digitally restored cinema versions. At Movie W you can enjoy Jarmusch’s three best films: ‘Stranger than Paradise’ (1984), ‘Down by Law’ (1986) and ‘Dead Man’ (1995).

This website uses cookies to improve your experience while you navigate through the website. Out of these, the cookies that are categorized as necessary are stored on your browser as they are essential for the working of basic functionalities of the website. We also use third-party cookies that help us analyze and understand how you use this website. These cookies will be stored in your browser only with your consent. You also have the option to opt-out of these cookies. But opting out of some of these cookies may affect your browsing experience.
Noodzakelijk Altijd ingeschakeld

Any cookies that may not be particularly necessary for the website to function and is used specifically to collect user personal data via analytics, ads, other embedded contents are termed as non-necessary cookies. It is mandatory to procure user consent prior to running these cookies on your website.