Feel-good drama, true story, based on the British bestseller of the same name that sold more than a million copies

When James Bowen (Treadaway), a heroin-addicted, homeless singer-songwriter in London ends up in hospital, he is given a small apartment as a last chance. In the hall of the building Bob finds a wounded stray ginger cat – a creature that changes his life forever.

James can’t find the cat’s owner and decides to take care of it until it recovers. When Bob gets back on his feet, though, he stays loyal to James and never leaves his side. Bob goes with James when he works as a street musician and sells the street newspaper. Will Bowen actually succeed in beating his addiction for good and getting his life together? 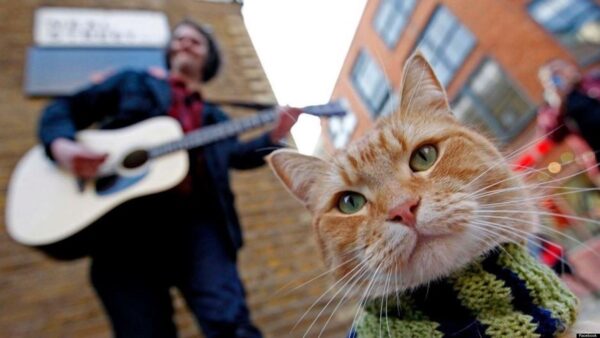 A Street Cat Named Bob does a good job combining the feel-good factor with the realistic, dark side of kicking drug addiction. Although the process that James has to go through is brutal and heavy, this remarkable cat makes it possible for him to endure. What’s truly special is that the cat playing Bob in this movie is the real Bob. It’s his acting debut, and he plays himself beautifully.