In the West, the female orgasm is still shrouded in mystery, but in Rwanda it’s the stuff of legend. Sacred Water is a respectful ode to female pleasure, with a sense of humor and not a trace of embarrassment.

Within the context of ‘International Women’s Day 2017’ Movie W shows this IDFA documentary as a special screening, introduced by guest speaker Jessica Duncan who will lead the discussion after the screening. Jessica is an Assistant Professor in the Rural Sociology Group (WUR). Originally from Canada, she lived in France, Spain and the UK before coming to the Netherlands.

The sacred water in the title refers to Kunyaza, female ejaculation. It’s a tradition, a ritual, every woman’s secret. 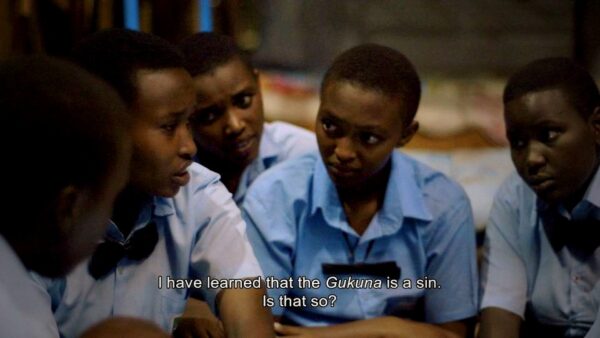 Tradition has it that this originates from a queen whose orgasmic flow was so copious that it formed Lake Kivu. Intrigued by the legend, a radio DJ named Vestine sets out to teach people about the sacred water and ensure that this sexual tradition is maintained. She also works to preserve the Gukuna ritual, in which young women prepare for sex using herbs and massage. Frank conversations about the Kunyaza technique are matched with footage of men straining at the oars on the lake. African rhythms, emphasized by the sound of raindrops, also serve as an analogy.